It all began last February or March 2005 when some tradesmen from Arklow, Co Wicklow were satiating their thirst at their usual watering hole in that town. A discussion took place as to what kind of help people less well off than themselves required. Many suggestions were put forward and discussed but by the end of the night it was decided that some type of project in Romania was the most popular choice. The “Heart to Hand” Charity is very familiar with the needs of the people in that Country and so this Charity was nominated to set the train in motion (so to speak). In April that year two of the team travelled to Romania to meet with Csaba Varga (Caritas) who showed them a suitable project in a town called St George, Northern Romania,

The project was to convert a massive attic into school rooms, offices and toilets for the children of this village. Measurements and quantities were recorded and these gentlemen reported back to their colleagues and the work of fundraising was put into action. The plan was to get all materials required supplied free of charge and hope that financial aid would materialise as well. We are glad to report that all requirements were met and the whole team (twelve in total) travelled to Romania in September that year. A state of the art school is now in place and both the “Gypsy Folk” and ourselves are very grateful for everything. 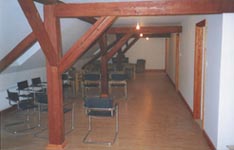 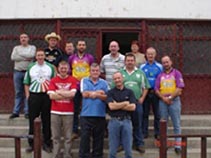