History of Heart to Hand 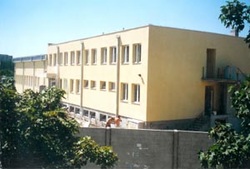 St. Joseph's house
In the year 1991 Kieran Byrne ( A Transport Haulier from Co Wexford) was watching a documentary programme on TV.

This programme showed in graphic detail the devastation and deprivation caused by the Communist regime in Romania . It was just after the overthrow of this government in 1990 that the exact extent of this devastation manifested itself. Kieran was to see children abandoned in the streets, dilapidated buildings inhabited by poor and hungry people.

This experience had a very traumatic effect on this man and He immediately rallied some friends around him and brought two loads of Humanitarian Aid to Bucharest ( Capital of Romania ). It was here that Kieran was to meet with Mother Teresa of Calcutta .

Mother Teresa asked Kieran to help her people in Albania and Romania saying that “ The Lord would provide” if there was a positive response.

Since it was established, hundreds of trucks full with Aid have been received by these unfortunate people

This Organisation responsible for the upkeep of this centre is known as The Street Children of Bucharest .

At that time (1999) three of the “Heart to Hand” team stayed with the centre while the rest took a different direction and began to seek and find other people who had been forgotten about .Supplying Aid to Orphanages was also taken aboard and that has been the case ever since.

Training and Education plays a very important part of our work and much help in given in this regard.

Our recent involvement with the Caritas Charity in Northern Romania has proven to be a very worthwhile venture. Through this charity we have become aware of the many poor people who heretofore were forgotten about.

To this end we are supporting Caritas in the training and education of these people.

Most of their programmes are long term and we in “Heart to Hand” are only too willing to help in this regard.

Some time ago Kieran received a telephone call from a Nun who was nursing in a Hospital in Albania . This Nun was very upset on the phone as she explained that an outbreak of Gastroenteritis had broken out in the Hospital and was very anxious to obtain Nappies and Incontinent pads.

As Kieran had no contact in this line he dismissed the whole thing.

Two days later he received a call from an acquaintance in the Dublin Docks area telling him that a truck containing merchandise had been vandalised and the recipient of this load would not accept it, fearing damage. The caller was offering this load to Kieran who asked what it consisted of ,and was amazed to be told that it was a truck load of Nappies and Incontinent pads.